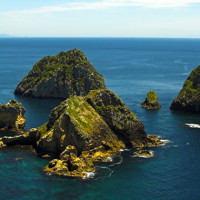 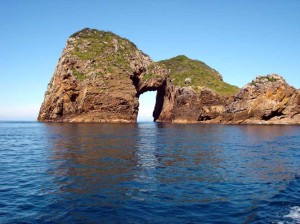 Join us for a truly incredible dive adventure as we explore some of the best diving that New Zealand has to offer. In one trip you will explore two of New Zealand’s diving jewels and 4 of their most famous wrecks! We will be exploring the Poor Knights Islands, Bay of Islands, HMNZS Waikato, MHNZS Tui, HMNZS Canterbury and the famous Rainbow Warrior!   We have timed our trip perfectly to ensure that the water temps are a little more comfortable for Brisbane diving regulars!  This incredible trip is strictly limited to 7 divers as that is the maximum loading for the MV Acheron live aboard.  Here is a brief run down of each site we will be exploring and a video of what you can expect: 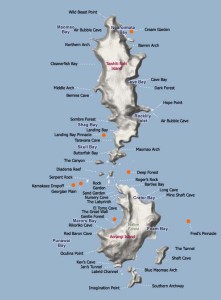 The Poor Knights Islands : The Poor Knights Islands are a complete marine reserve and rated in the top ten dive sites in the world by diving pioneer Jacques Cousteau. The Poor Knights Islands are the eroded remnants of a 4 million year old volcano. Ten million years ago a series of violent eruptions created a large land mass off New Zealand’s north east coast. Constant erosion by wind and wave action, combined with sea level changes have created the stunningly dramatic cluster of islands and rock formations that are now known as the Poor Knights. With dense kelp forests, sand channels, vertical walls, giant sea caves, archways and underwater caverns, it is no wonder that divers come from all over the world to dive in the Poor Knights. Add to this a subtropical current that carries marine life from tropical waters and you have a diver’s heaven.

Check out this awesome video from the Everything Travel Group about the incredible array of sea creatures waiting for you:   http://www.youtube.comwatch?v=eanp29FwDZw 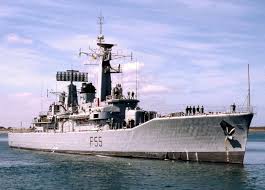 HMNZS Waikato – The frigate ex HMNZS Waikato was built by Harland and Wolff in Belfast, Ireland, launched on February 18 1966, and commissioned into the Royal New Zealand Navy on September 5, 1966. At 113.4m long, 12.5m beam and a draft of 5.5m she was the first of the Leander class frigates built for the navy. She had a top speed of 30 knots, and was powered by twin steam turbines developing 30,000hp. The Waikato was armed to the teeth, sporting twin 4.5in guns in the turret, two 20mm Orlikeon machine guns on the wings, a quad Seacat anti-aircraft missile launcher, six 12.75m anti-submarine torpedo tubes, one anti-submarine warfare Limbo mortar Mark 10 and a Wasp Helicopter capable of delivering depth charges and the Mark 46 anti-submarine torpedo. She served the RNZ Navy until decommissioning in 1998. Tutukaka Coast won the tender and prepared the ship for divers during 1999/2000. Finally the ship was sent to her final resting place on the 25th of November 2000 in a world record time of 2 min 40 seconds. She now rests in 28m of water. The Waikato was the only purpose-sunk frigate in the Southern Hemisphere before the HMAS Canberra and HMAS Adelaide were sunk in Australia. Her turret and one propeller were left on the ship.

Check out this awesome video of the HMNZS Waikato by Pelagic Productions UW – http://www.youtube.com/watch?v=5eZg18A53IY 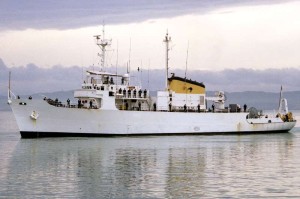 HMNZS Tui – Formerly USNS Charles H. Davis (T-AGOR-5), was one of nine Conrad class oceanographic ships built for the United States Navy (USN), that later saw service in the Royal New Zealand Navy (RNZN). Serving with the USN from 1963 to 1970, these ships were designed to perform acoustic experiments on sound transmission underwater, and for gravity, magnetism and deep-ocean floor studies. For the last 17 years of her working life she was leased out by the United States Navy to become the HMNZS Tui, deployed on naval hydrographic work. She was also sent to Mururoa to observe the last series of French Nuclear bomb tests in the South Pacific, and became the unofficial mothership to a large international protest fleet.The Tui was gifted to Tutukaka Coast Promotions after long negotiations, prepared for her new role as a dive attraction and sunk off Tutukaka on the 20th of February 1999.In 1999, the ship was scuttled as a dive wreck. In February 1999, Tui was scuttled 2 kilometres (1.2 mi) from Tutukaka Heads to serve as a tourist attraction and wreck for divers, following a period of work on her which removed any objects in danger of breaking free and welding shut any areas that may have posed a hazard for wreck diver. She was sunk at a depth of 32m of water.

The wrecks of the Tui and the Waikato after 5 years on the seabed – http://www.youtube.com/watch?v=kDw_Er4gEwk

Our Vessel : The MV Acheron diving vessel will be our home for the first 5 nights of our adventure. Acheron is a 23m wooden launch with luxurious accommodation for up to 8 guests in 4 twin berth with ensuite cabins. The well-equipped boat offers a high level of diving convenience on the covered back deck and has been designed to suit the needs of all divers. She will be our diving platform to explore the Poor Knights Islands and the wrecks of the Tui and Waikato.

More about our boat here : https://www.facebook.com/pg/RVAcheron/photos/?ref=page_internal 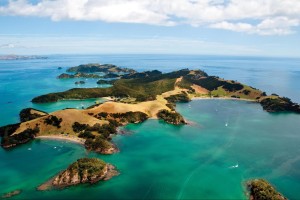 Bay of Islands – The Bay of Islands is an area in the Northland Region of the North Island of New Zealand. Located 60 km north-west of Whangarei, it is about 210 km by road to Cape Reinga at the northern tip of the country. It is one of the most popular fishing, sailing and tourist destinations in the country, and has been renowned internationally for its big-game fishing since American author Zane Grey publicised it in the 1930s.

A full list of the dive sites that will be available to us at the Bay of Islands can be found here: http://www.northlanddive.com/diving/sites.html 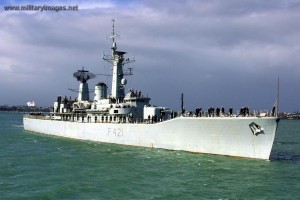 HMNZS Canterbury –  (F421) was one of two broad beam Leander class frigates operated by the Royal New Zealand Navy (RNZN) from 1971 to 2005. HMNZS Canterbury was laid down on 12 June 1969 by Yarrow Shipbuilders and launched 11 months later on 6 May 1970. Commissioned on 22 October 1971, Canterbury went on to see operational service in much of Australasia and other regions like the Persian Gulf, undertaking operations like supporting UN sanctions against Iraq and peace-keeping in East Timor. In addition, Canterbury and her sister ship HMNZS Waikato relieved the Royal Navy frigate HMS Amazon in the Indian Ocean during the Falklands War, and later on her own, relieved the frigate HMNZS Otago at Moruroa during anti-nuclear protests. Canterbury was decommissioned in

2005 and after extensive works to remove potentially toxic materials, she was scuttled on 3 November 2007 at Deep Water Cove in the Bay of Islands to provide a dive wreck. She lies in 38 metres (125 ft) of water

Here is a  fantastic video of the HMNZS Canterbury as she lies on the seafloor today filmed by Axel Busch : http://www.youtube.com/watch?v=Jz_O9tTA6AA 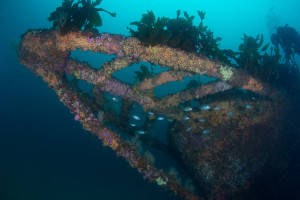 Rainbow Warrior – The Rainbow Warrior (sometimes informally called Rainbow Warrior I) was a former UK Ministry of Agriculture, Fisheries and Food (MAFF) trawler later purchased by the environmental organization Greenpeace. The ship was active in supporting a number of Greenpeace protest activities against seal hunting, whaling and nuclear weapons testing during the late 1970s and early 1980s. She was sunk whilst in harbour in New Zealand by operatives of the French intelligence service (DGSE) on 10 July 1985, killing one of the activists. The wreck of the Rainbow Warrior was refloated on 21 August 1985 and moved to a naval harbour for forensic examination. Although the hull had been recovered, the 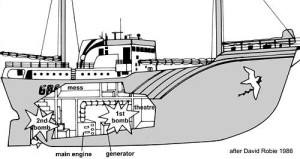 Matauri Bay in the Cavalli Islands, New Zealand, on 12 December 1987, to serve as a dive wreck and artificial reef to promote marine life.

Check out this sensational video of the Rainbow Warrior filmed by D M Larsson https://www.youtube.com/watch?v=bEIAjwCg-Fo

Suitable for Advanced Open Water Divers but preferably with Deep certification  (certified to 40 metres)
Wreck certification is not a requirement to dive these sites but is highly recommended
Depth ranges from 6 – 40 metres
EAN (nitrox) is included for the whole trip (certification is required)
Diving by yourself? We will buddy you up with another diver with similar experience

Private van transfers for the trip

PDS is able to rent you a wetsuit, BCD, regulator and computer for the trip.  Please communicate your requirements on the booking form. Each diver must provide their own mask, snorkel, fins and boots (not available for hire). Underwater camera and torches are also available and are subject to availability. All gear must be arranged prior to the trip and we will arrange to get the gear to you so you can pack it in your luggage for the trip.

HOW TO BOOK
Download the booking form attached to the page. Complete the required fields, scan and email to [email protected].