﻿ Explore Windarra Banks – The Cod Grounds and find out what all the fuss is about!

Explore Windarra Banks – The Cod Grounds and find out what all the fuss is about!

Home » Day Trips » Explore Windarra Banks – The Cod Grounds and find out what all the fuss is about! 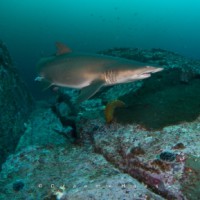 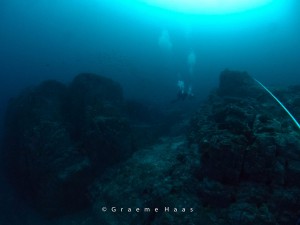 Probably the most legendary dive site near Byron Bay and definitely the most requested by divers venturing out with Blue Bay, Windarra Banks is located 16 km North-East of the Brunswick Heads bar. Divers who are fortunate enough to have visited Windarra Banks in the past, rate it as one of Australia’s best dive sites. Being so far out, diving at Windarra Banks is extremely subject to sea conditions and very hard to plan. Not only do sea conditions have to be favourable on the day to make the 16 km journey acceptable for our customers, we also have to take into account the ocean currents that run along the East Coast of Australia. The strength of the current can’t be predicted from shore and is independent of the weather pattern, so the only way to know is to go out and check it. 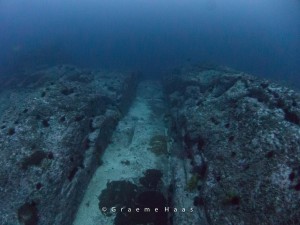 The dive site consists of two enormous bommies or sea mountains approximately 500 metres apart and a lot of rocky country rising up to about 25 metres depth with the sandy bottom at about 45 to 50 metres. Due to it’s location and depth, Windarra Banks is a truly challenging dive site for the more experienced diver.

You can see several types of shark including Grey Nurse Sharks, Bronze Whalers, Tiger Sharks and Hammerheads as well as big schools of large pelagics including Kingfish, Tuna, Trevally, Barracuda, Wahoo and Mackerel when in season. Since Windarra Banks is not dived frequently, most marine life is not used to scuba divers and especially sharks can be quite inquisitive. Throughout February and March of 2012, we saw big schools of Hammerhead Sharks swimming past. There has been a friendly dolphin hanging around the boat during surface intervals, and even a Whale Shark was seen out there earlier in the year. This is why the saying goes: “You could see ANYTHING out there”. 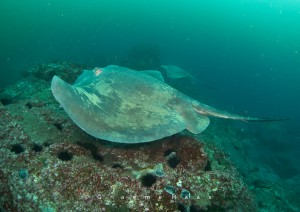 Cost of the Day – $180 inclusive of two dives, fuel surcharge, tanks, weights, tea, coffee, snacks, exclusive use of the Bay Warrior and for the first 6 people who book on… return transport.

**Please note that every effort will be made to make it to Windarra Banks but it is VERY dependent on ocean and weather conditions. It is a challenging site which is very prone to current so it will only be attempted if the conditions allow. If the weather or ocean don’t play ball, we will be diving Spot X or the Mackerel Boulder off of Julian Rocks (two other dives sites VERY rarely dived by the shops in Byron).

The Mackerel Boulder is a beautiful rocky area surrounding a giant boulder that rises from the sandy bottom at about 25 metres up to 15 metres below the surface. The shallower areas consist of deep cracks in the rocks, big enough for divers to swim through and explore. In winter, Grey Nurse Sharks visit the Mackerel Boulder, in summer Leopard Sharks and Manta Rays can be seen here. All year round, the area is best known for large pelagics, so keep your eyes open when you first start your descent and make sure you look up into the blue every now and then to make sure you’re not missing anything.

Spot X was named by Rod of Blue Bay Divers (former owner of Sundive). It’s a great dive site only about 800 metres from Julian Rocks. It consists of two big bommies that rise up to about 17 metres. The sandy bottom is at about 25 metres. Spot X is a good spot for large pelagics such as Kingfish, Trevally, Mackerel and Wahoo, especially when there is a bit of current. Grey Nurse Sharks can be seen here from June to December, Bronze Whalers cruise by frequently all year round. The marine life at Spot X is very similar to Julian Rocks, but more concentrated in a smaller area especially with current.