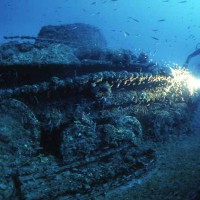 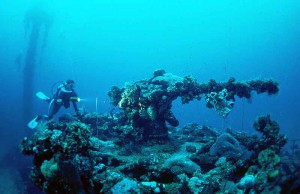 Join us as we dive one of our world’s meccas of wreck diving!

Chuuk Lagoon, formerly known as Truk Lagoon, is a sheltered body of water in the central Pacific. About 1800 km north-east of New Guinea, it is located mid-ocean at 7 degrees North latitude, and is part of Chuuk State within the Federated States of Micronesia. The atoll consists of a protective reef, 225 kilometres (140 mi) around, enclosing a natural harbour 79 by 50 kilometres (49 by 30 mi), with an area of 2,130 square kilometres (820 sq mi).[1] It has a land area of 127.4 square kilometres (49.2 sq mi), with a population of 47,871 people. 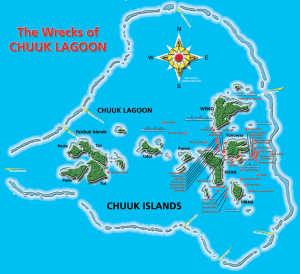 During World War II, Truk Lagoon was the Empire of Japan‘s main base in the South Pacific theatre. The Japanese garrison consisted of 27,856 IJN men under the command of Vice Admiral Masami Kobayashi then Vice Admiral Chuichi Hara and 16,737 IJA men under the command of Major General Kanenobu Ishuin.[4] A significant portion of the Japanese fleet was based there, with its administrative center on Tonoas (south of Weno). Truk was the base for Japanese operations against Allied forces in New Guinea and the Solomon Islands. Due to its heavy fortifications, both natural and manmade, the base at Truk was known to Allied forces as “the Gibraltar of the Pacific”.[5] 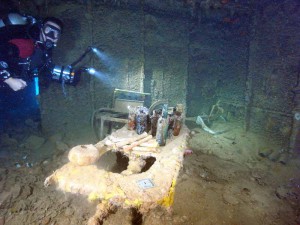 Operation Hailstone, executed by the United States in 1944,[6] culminated in one of the most important naval airstrikes of the war at Truk. Twelve Japanese warships, thirty-two merchant ships and 249 aircraft were destroyed, although the larger warships had moved to Palau a week earlier. 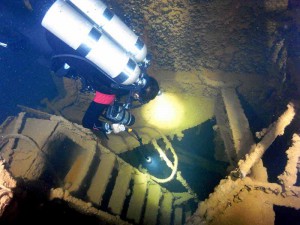 During WWII Truk Lagoon served as the forward anchorage for the Japanese Imperial Fleet. The place was considered the most formidable of all Japanese strongholds in the Pacific. On the various islands, the Japanese Civil Engineering Department and Naval Construction Department had built roads, trenches, bunkers and caves. Five airstrips, seaplane bases, a torpedo boat station, submarine repair shops, a communications center and a radar station were constructed during the war. Protecting these various facilities were coastal defense guns and mortar emplacements. At anchor in the lagoon were the Imperial Japanese Navy‘s giant battleships, aircraft carriers, cruisers, destroyers, tankers, cargo ships, tugboats, gunboats, minesweepers, landing craft, and submarines. Some have described it as Japan’s equivalent of the Americans’ Pearl Harbor. 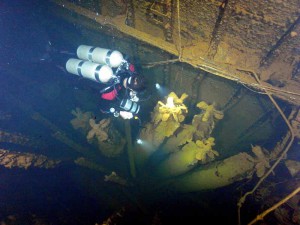 Once the American forces captured the Marshall Islands, they used it as a base from which they launched an early morning attack on February 17, 1944 against Truk Lagoon. The Japanese withdrew most of their heavy units. Operation Hailstone lasted for three days, with an American bombardment of the Japanese wiping out almost anything of value – 60 ships and 275 airplanes were sent to the bottom of the lagoon. The superior force of United States ships and planes made the Truk lagoon the biggest graveyard of ships in the world.[7]* 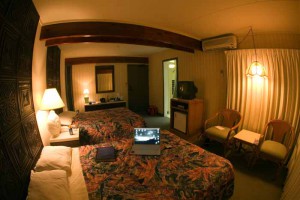 Cost Does Not Include: 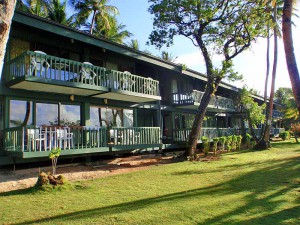 Conditions Apply:
Prices are subject to change at any time without notice due to supplier rate changes. See other terms and conditions as per the Dive Adventures website- www.diveadventures.com.au

Want to just fill it out online now?! Click on this link to book on straight away!