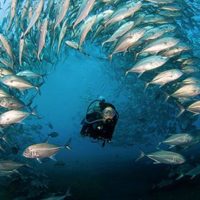 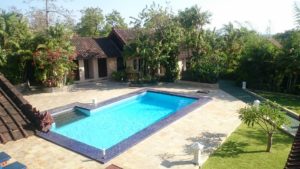 Tulamben, is a little village on the northeast coast of Bail. The beach is covered in black sand and fist size rocks. Diving the Tulamben’s coast, which boasts colourful coral gardens, plunging walls, fantastic macros sites and Tulamben’s renowned wreck dive, the USAT Liberty. The Liberty is located just off shore ; she is 120m long and rests on a 90 degree angle with the deck facing the open sea! Hit by a torpedo in World War II she is now festooned in coral making a fantastic artificial reef home to diverse marine life. Be it pelagic species or macro there is something on the Liberty wreck to captivate and enthrall every diver. 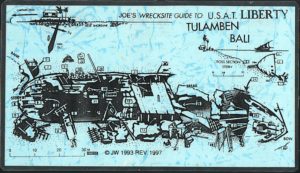 USAT Liberty Wreck
Just 30 metres from the beach at Tulamben, is a WWII cargo ship broken up, but still a large wreck stretching 120 metres long on a sloping sandy bottom. The top of the wreckage is just 3 metres below the waters surface and the bottom is 29 metres. On January 11, 1942, the ship was hit by torpedoes from a Japanese submarine while crossing Lombok Strait carrying rubber and railroad parts. Badly damaged, two destoyer ships towed the USAT Liberty up onto the beach at Tulamben. The volcanic explosion of Gunung Agung in 1963 rolled Liberty off the beach to its present location, in the process the USAT Liberty broke into pieces. The wreck is now covered with a variety of corals and it is estimated that some 400 species of reef fish live on the wreck. 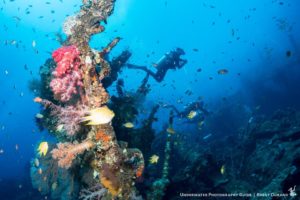 Coral Garden
This shallow patch reef us delightful and richly covered more than 200 metres and lies in 5- 15 metres of water. This reef is dominated by Acropora, hard corals, some large table corals and bushes of Hydroids and supports a diversity of fish population such as Parrotfish, Wrasse, Snapper, as well as Ribbon Eels, Frogfish and Scorpionfish. Photographers and divers who like macro sea life, this will be a favourite.

Drop-off (Rugged Wall)
The reef wall descends down over 70 metres. Black, soft and hard corals grow well on the crannies and overhangs. At 18 metres there live an abundance of Cleaner Shrimp and large fish are waiting at the overhangs to be cleaned. The hook of the wall at 28 metres where the reef extends to the sloping eastern reef stands a huge purple sea fan Gorgonian, which is over 2 metres wide and is the landmark on the reef wall. A prolific variety of schooling fish swim around the corner of the wall and even invertebrate animals are often encountered at this rugged wall reef. 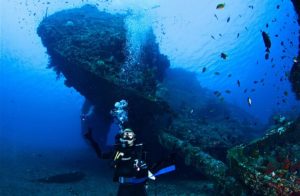 ITINERARY
Wednesday, 4 April
10:05am- Depart Brisbane on Virgin Australia flight and arrive in Denpasar at 2:45pm

PDS is able to provide you with a wetsuit, BCD, regulator set, computer and hire pricing for the week will be provided upon application. Please note that you will need to arrange to collect the gear from us (Brisbane based customers) prior to the trip and this gear must be incorporated into your own luggage allowance for your flights. Hire costs will apply. Alternatively, gear hire can be hired from the operator in Bali.

Download the booking form attached to the page. Complete the required fields, scan and email to [email protected]